Euro is the second most traded currency on the FX market, only the United States Dollar is traded more. Data obtained by the 2013 Triennial Central Bank Survey show that the Euro was included in 33 percent of all FX transactions for the year 2013. Together, the EUR and the USD forms the most traded currency pair in the world. For the year 2013, the EUR/USD currency pair comprised right under 25% of the total FX trade. 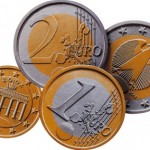 The central bank for the Euro is the European Central Bank (ECB) in Frankfurt. In its monetary policy, ECB has so far focused chiefly on keeping very low interest rates.

Where is Euro the official currency?

Examples of nations and territories outside Europe where Euro is the official or de facto currency are Clipperton Island (an overseas minor territory of France under direct authority of the Minister of Overseas France), the Territorial collectivity of Saint-Barthélemy (a French Overseas Collectivity), Saint-Pierre-et-Miquelon (a French Overseas Collectivity), and Territory of the French Southern and Antarctic Lands (an overseas territory of France).